skip to main | skip to sidebar

Tom Tancredo, who until this month was a Colorado congressman, says he's ecstatic over President Bush's decision to commute the sentences of two former Border Patrol Agents on his last day in office.

By the end of March, Jose Compean and Ignacio Ramos will finally get to be home with their families. More than 80 members of Congress had signed a petition asking for their release and urged the president to free the men.  Tancredo was one of the lawmakers who spearheaded the release effort, and has since formed the Rocky Mountain Foundation to continue to pursue a border enforcement agenda.

"I am ecstatic. I'm just glad as I can possibly be -- and I thank God," Tancredo said. He will continue to work to get the two men a full pardon so they can return to their jobs, “but it is more important that they are finally getting out of jail.”

Sen. John Cornyn of Texas said “I am extremely pleased the president answered my plea, and that of like-minded colleagues and millions of Texans and Americans, in commuting the sentences of Border Patrol Agents Ramos and Compean. This case cried out for a commutation and the president has now acted to right the wrongs of their excessive and unjust sentences.”

Said Rep. Dana Rohrabacher of California: “Our prayers have been answered! This is not just a day of celebration for the families but it is a victory for all Americans. The hearts of all patriotic Americans are filled with joy at the announcement that our brave border defenders, Ramos and Compean, will be freed from unjust captivity. “
Posted by Edward I Nelson at 7:03 PM 53 comments: 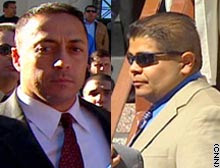 With less than 24 hours left in his presidency, George W. Bush at last granted clemency to two former Border Patrol agents, Jose Compean and Ignacio Ramos. The two had received lengthy prison sentences after being convicted of shooting a fleeing Mexican drug dealer.

Clemency for the two former agents was a major goal of USBC and attracted considerable support among all advocates of tougher border security, who had repeatedly argued that the agents were just doing their jobs.

A large number of senators and representatives, both Republicans and Democrats, had supported clemency for the two men. A Senate Judiciary Committee hearing in 2007 emphasized that the drug dealer had crossed the United States-Mexican border illegally and drove a van containing 743 pounds of marijuana worth almost $1 million.

The commutation granted by President Bush means the prison sentences of Ramos and Compean, both from El Paso, Texas, will expire on March 20, but leaves intact the three years of post-imprisonment probation and fines of $2,000 each. Both had been in prison since early 2007. Much of that time was spent in solitary confinement, which was said necessary to protect the former law enforcement agents from other inmates.

Bush commuted the sentences before he received a recommendation from the Justice Department's pardon attorney. "The Office of the Pardon Attorney was still in the process of reviewing the clemency requests from Compean and Ramos at the time these commutations were granted," a Justice official says.

In fact, the Justice Department was still reviewing the applications and had not made a recommendation to the White House.
Posted by Edward I Nelson at 1:46 PM 25 comments:

Tancredo’s biggest regret - the continuing imprisonment of Ramos and Compean 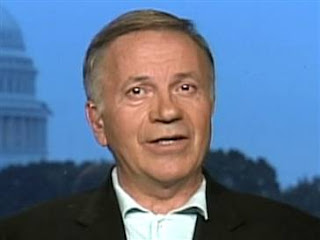 By repeatedly making provocative statements during his 10 years in Congress, Tom Tancredo believes he spurred activism and helped block legislation that would have allowed illegal immigrants to eventually gain legal status.

"I have a sense of accomplishment. It makes me feel good," said the Colorado Congressman.

Tancredo leaves office this month. He plans to consult and to continue work on immigration issues and to spend time with his grandchildren.

Tancredo said he regrets not succeeding in his effort to help win release of U.S. Border Patrol agents Ignacio Ramos and Jose Compean, who are serving time in prison for shooting and wounding a drug smuggler.

"I think about those guys in prison, and I'm just sick at heart," Tancredo said. "I've done everything I can."

When he left Capitol Hill for the last time in late November, Tancredo gathered with his staff. As they exchanged goodbyes, Tancredo offered his version of high praise.

"We really started something," Tancredo said.
Posted by Edward I Nelson at 5:58 PM 18 comments:

Pennsylvania congressman joins those calling for pardon for Ramos, Compean 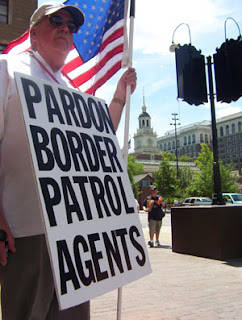 U.S. Rep. Charlie Dent, Republican of Pennsylvania, has added his voice to those calling on President Bush to pardon two former border agents convicted of shooting an unarmed drug smuggler who was trying to escape.   Ignacio Ramos and Jose Compean are serving more than 10 years each for shooting Osvaldo Aldrete Davila in the buttocks while he was fleeing from an abandoned van loaded with 750 pounds of marijuana.

The men argued that they thought Davila, a Mexican, was armed. They were convicted two years ago in federal court in Texas of assault, civil rights violations and other charges. Davila later pleaded guilty to smuggling following another incident and also was sentenced to 10 years in prison.

Dent asked Bush to review their cases and ''seriously consider'' a pardon.  ''These agents were acting in fulfillment of their duty and responsibility to protect our borders and enforce the law and they have been unjustly punished for their actions.  ''This case has not only undermined the trust and confidence of our Border Patrol, but it has also raised questions about the discretion and decisions of federal prosecutors.''

You can help build pressure for pardoning the two by sending an email alert demanding a pardon. Visit www.usbc.org and go to the Legislation Action Center or send an email directly to the President at president@whitehouse.gov.
Posted by Edward I Nelson at 3:58 AM 4 comments:

On December 1 south of Tucson, Arizona, drug smugglers unloaded $1 million in drugs across the U.S. border and sprayed bullets at U.S. Border Patrol agents with automatic weapons. The agents did not return fire. They fear losing their jobs or ending up behind bars like agents Ignacio Ramos and Jose Compean.

Former decorated border agents, Ramos and Compean are serving lengthy prison sentences for shooting an illegal alien drug dealer while he smuggled 750 pounds of marijuana across the border. They were convicted of assault, discharge of a weapon in the commission of a crime of violence and deprivation of civil rights after the drug dealer was given immunity from prosecution.

On December 22 President Bush issued 19 pardons and commuted one sentence, but has issued none as yet for Ramos and Compean. Lawmakers and many others have asked Bush to commute their prison sentences. Bush will leave office January 20.

After this month's incident, an anonymous officer said that agents often fear defending themselves because shooting back could mean prison time – just as it did for Ramos and Compean.

'These men are still in prison for doing what many of us think was just doing their jobs as Border Patrol agents,' he said.
Posted by Edward I Nelson at 5:50 AM 12 comments:

Lawmakers step up pressure on Bush for border agents’ clemency

As they leave office, it's a long-standing tradition for presidents to offer clemency. Lawmakers from both parties have formally pressed President Bush to commute the sentences of former Border Patrol agents Ignacio Ramos and Jose Compean, serving 11 and 12 year sentences for shooting a drug smuggler in the backside as he fled the scene.

'It's frustrating. Scooter Libby was pardoned before he even goes to jail,' said Rep. Ted Poe, R-Humble, a former judge. 'These two guys are political prisoners.'

Rep. William Delahunt, a Massachusetts liberal, is leading the bipartisan push for clemency with Rep. Dana Rohrabacher, a California conservative.

If Bush fails to act in the next nine weeks, advocates may have an ace in the hole. President-elect Barack Obama's White House chief of staff, Rep. Rahm Emanuel, D-Ill., co-sponsored a resolution calling for clemency for the two former agents last December.

Rep. John Culberson, R-Houston, 'I can't think of a better way for Bush to restore political capital, with one stroke.'

T.J. Bonner, president of the National Border Patrol Council – the agents union – called it past time for the president to redress the 'terrible injustice.' 'The effect on morale has already been devastating. You have agents out there wondering what the rules of the game are,' he said.
Posted by Edward I Nelson at 7:16 PM 37 comments:

Pardons for Ramos and Compean are bring considered at DOJ 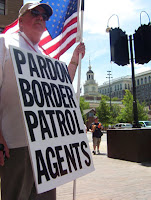 In the last two months of the Bush administration, the Department of Justice (DOJ) is considering whether to recommend pardons for two former Border Patrol agents, each jailed for more than a decade after shooting a Mexican drug smuggler in the buttocks.

The cases of Ignacio Ramos and Jose Compean are now before the DOJ’s Pardon Attorney Donald Rodgers, who works in consultation with the attorney general’s office to assist the president. The president has sole power of clemency in federal cases under the Constitution, and will make the decision, no matter what the Office of Pardon Attorney recommends.

This month, U.S. Border Control members have mailed over 100,000 postcards to President Bush, telling him that he should pardon the two decorated Border agents immediately, and that their imprisonment is a stain on his legacy.

You can help build pressure for pardoning the two by sending an email alert demanding a pardon. Visit (www.usbc.org) and go to the Legislation Action Center or click on this link to go directly to the email to send to the Presdent.

Both the House and Senate have held hearings investigating the prosecution of the agents, and numerous members of Congress have called on President Bush to pardon the two men.
Posted by Edward I Nelson at 5:54 PM 2 comments: 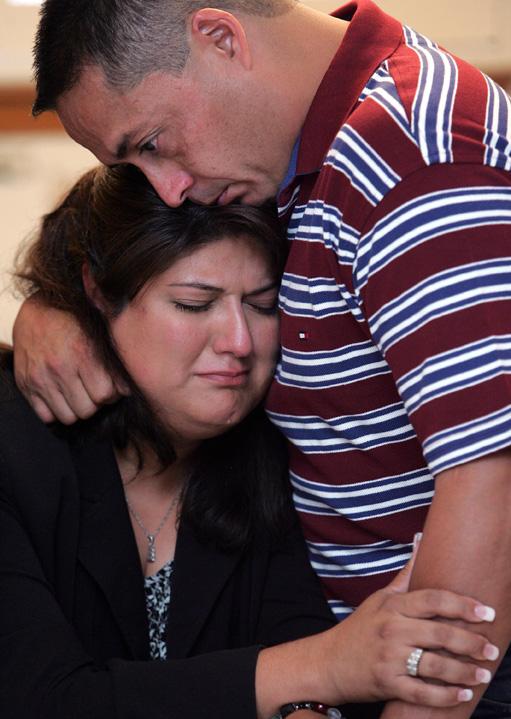